With one of the biggest projects in the area The Sunshine Coast University Hospital with a build cost of $2 Billion is now the largest employer on the coast and I was talk to someone has said that in the Birtinya Suburb where the hospital is located there is $1 Million changing hands every day in and around the area and I would not be surprised by that at all. Also with the completion of the Sunshine Coast Private Hospital that was finished two years before the public hospital open its doors. This is a massive boost to the area. 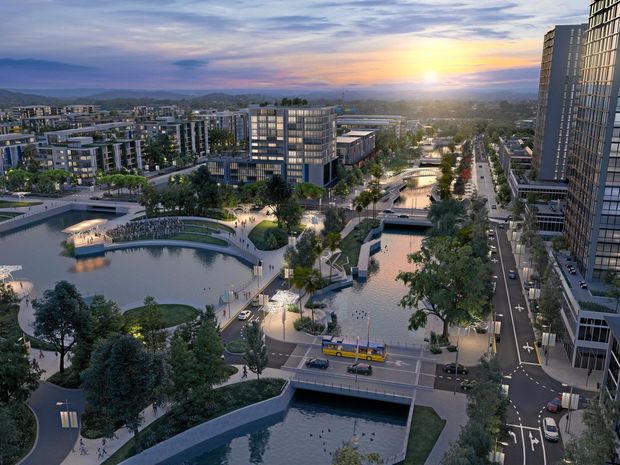 The seconded biggest is the new Maroochydore CBD development called Suncentral. The council has resumed the land of an 18 hold golf course to build their new CBD.

First stage civil works costing $25 million are set to commence on the new Maroochydore city centre, creating more than 150 jobs over 12 months. New roads, footpaths, cycleways, lighting, parks and landscaping will take shape in the civil construction works, as well as the installation of underground services and smart city infrastructure that will position the CBD amongst the most technologically advanced in Australia.

SunCentral, the company overseeing design and delivery of the new city centre on 53-hectares in the heart of Maroochydore, said the start of civil works was a significant milestone for the project. “The foundations of this new CBD will be unlike those of any other Australian city centre,” SunCentral CEO John Knaggs said. “We will have three separate conduits for NBN Co, Telstra and the new CBD’s dedicated Smart City fibre optic network, as well as the first CBD-wide underground Automated Waste Collection System (AWCS) in Australia. “Around 1.7km of AWCS pipes will be laid beneath stage one of the CBD.” The pipes will allow waste to be transported underground at speeds of up to 70kmh to a central transfer station – making footpath garbage collections obsolete in the new city centre.

Mr Knaggs said eight new streets are included in stage one of the CBD, creating lots for commercial, retail and mixed use development, with a central block to be transformed into a public park. “The cost of works to be completed in this first stage is approximately $25 million and it is estimated that at least 150 jobs will be generated in the construction and professional services sectors,” he said. “Over the longer term, the new CBD is expected to create more than 15,000 jobs and provide a $4.4 billion boost for the Sunshine Coast economy.” 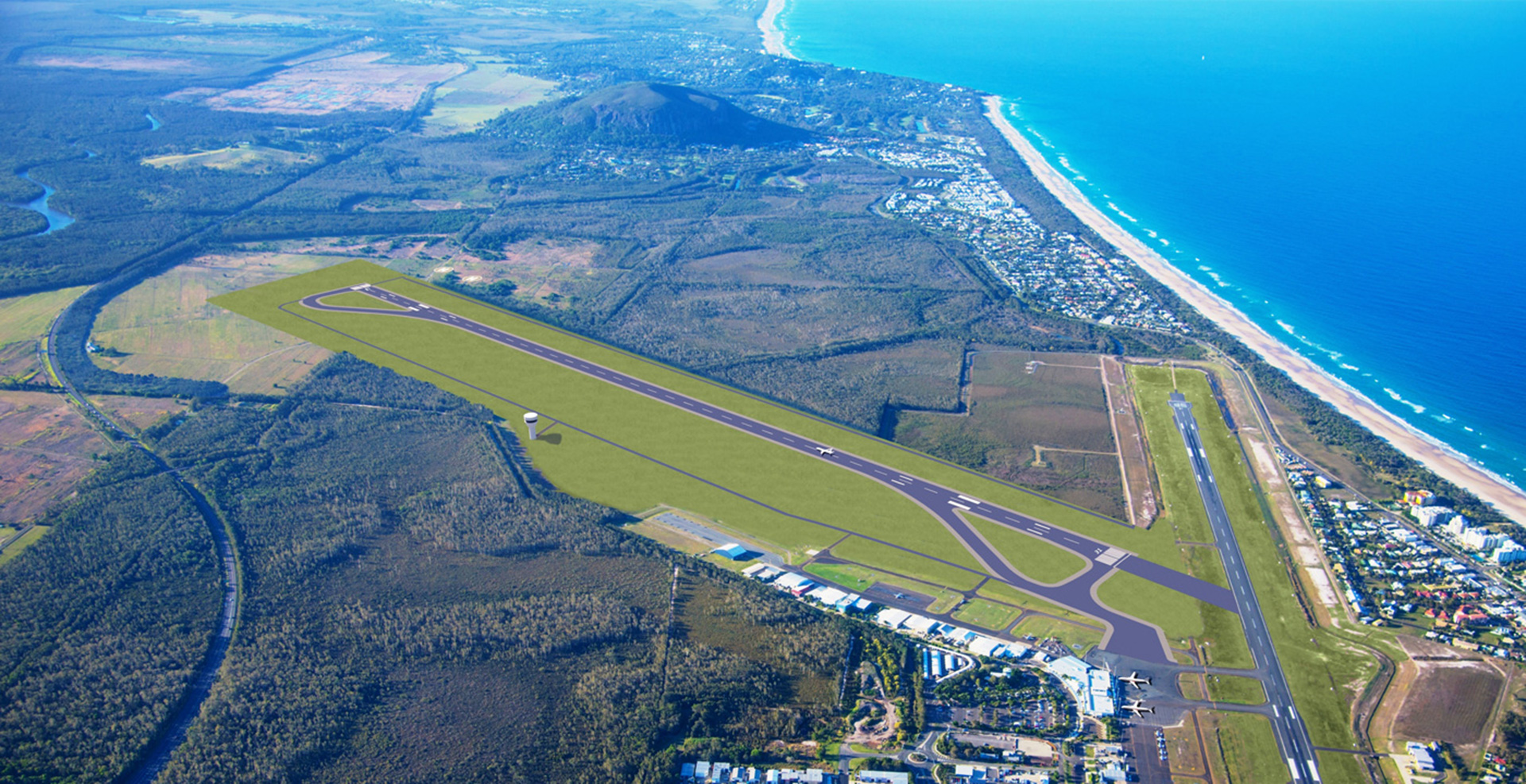 Key deliverables The New Runway Project will include:

READ MORE ON THE RUNWAY EXTENSION 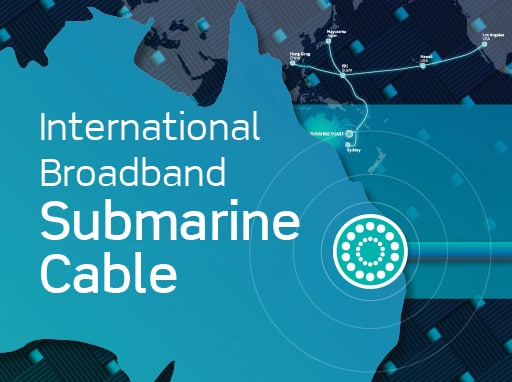 From 2020, the Sunshine Coast will deliver Australia’s fastest telecommunications connection to Asia and the second fastest to the United States thanks to a new international submarine cable contract agreed between Sunshine Coast Council and RTI Connectivity Pty Ltd (RTI-C). The new cable will increase Queensland’s international competitiveness and stimulate new investment.

Independent modelling forecasts that this cable will generate for Queensland:

Queensland businesses will, for the first time, be able to bypass Sydney and connect direct internationally. This will provide business with a range of new opportunities that come with increased speed and diversity. This connectivity will give major data-intensive companies such as Facebook, Google, Amazon and Microsoft the opportunity to revisit the benefits of where they locate their Australian investments.The project includes a 550 kilometre undersea fibre optic cable that will connect the Sunshine Coast to the 9,600 kilometre Japan-Guam-Australia-South (JGA-S) submarine cable. 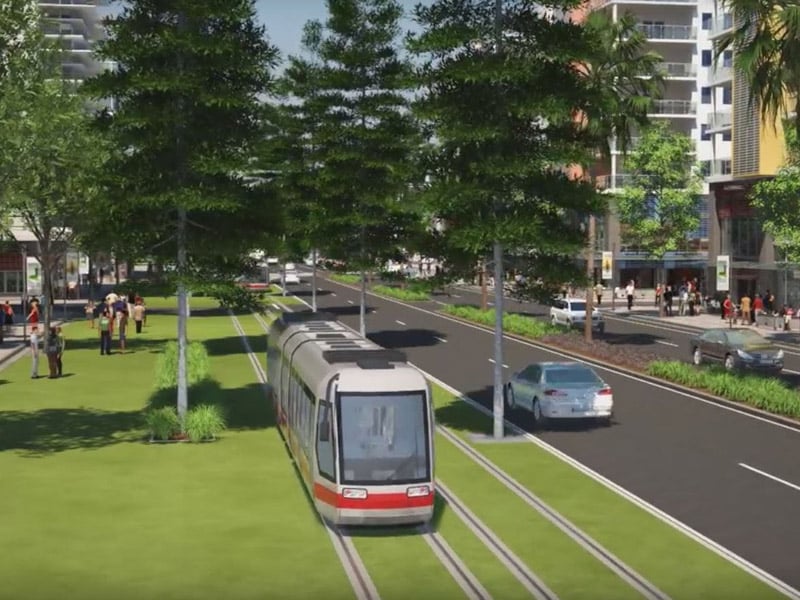 Light Rail is one of the major game-changing projects spearheading council’s plans to sustain the Coast’s prosperity, lifestyle and natural assets into the future. The recently released draft SEQ Regional Plan acknowledges the need for a passenger transport trunk corridor from Maroochydore to Caloundra and on to Beerwah, a corridor that reflects council’s proposed light rail route between Maroochydore and Caloundra.

Following council’s decision to endorse a preferred alignment for further investigation between Maroochydore to Caloundra, work has continued on getting a better understanding of the costings and developing a planning strategy for the coastal corridor, which will feed into the feasibility and business case for the light rail project.

The Sunshine Coast is expected to experience high population growth over the next 20 years. The areas between Maroochydore and Caloundra will be the focus of economic growth as the Maroochydore City Centre and the new Sunshine Coast Public University Hospital at Kawana are developed.

Planning for our growth is critical to protecting our coastal lifestyle, our outstanding natural assets, character and identity, ensuring we have employment and economic opportunities for our residents in the future. At this point in time there is a unique and exciting opportunity for the Sunshine Coast to plan for a new way to move and accommodate projected growth while protecting the unique and attractive lifestyle for future generations. In addition to its capacity to move large volumes of people efficiently, light rail is recognised for its ability to improve property values, stimulate investment and improve the urban environment.

Light rail will provide an efficient, high quality transport option and has the potential to generate social, economic, transport and environmental benefits across the Sunshine Coast including:

READ MORE ON THE LIGHT RAIL